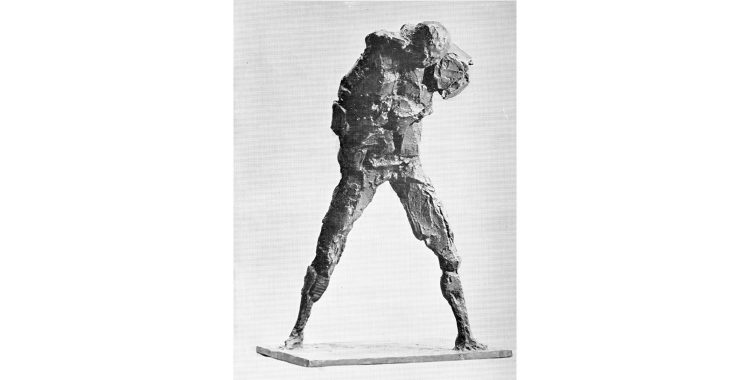 What is the importance of the Striding Man?

Striding Man is Richmond’s outstanding contribution to a canon of works by various sculptors that were gifted to forty-eight educational establishments by London Country Council after the Second World War. These works were intended to provide a liberal cultural focal point to inspire and enliven inquiring young minds as the beneficiaries of a hard-won peace. The inspiration for Striding Man was initially drawn from William Penn (1644-1718), the founder of the Province of Pennsylvania, after whom the Charter School was originally named.  Penn, an enlightened and progressive thinker, advocated democracy and religious tolerance. The significance and historic legacy of Striding Man was recognised by Historic England when the sculpture was listed in 1998 as an iconic work, representative of the post-war era.

In what way does the sculpture define that particular era?

The distortion of the human silhouette, the deeply indented surface friction, and the portrayal of burdened emotion were characteristics of a post-war British sculptural trend that absorbed and re-interpreted scarification, striation, and corrosion as a metaphor for the inner turmoil inflicted upon those who had endured the fury of the war. Richmond was amongst other great sculptors including Alberto Giacometti, Germaine Richier, and Elisabeth Frink in employing the resilience of this semiotic persona. Yet Striding Man remains relevant today exemplifying our persistent need for the stoicism which prevails in our current battle with the Coronavirus pandemic.

Richmond was an assistant to Henry Moore, do you see anything in Striding Man that nods to his former mentor?

Richmond was an assistant to Henry Moore from 1949-50, returning intermittently for a further four years. Mentored by Moore, Richmond used this opportunity wisely to enhance his skills and techniques, although the angularity and rough-hewn surface of Striding Man does not directly reflect the more curvaceous, smoothed aesthetic of Moore’s early 1950’s sculptures. However, Richmond’s later works such as Head of a Warrior c.1968 and Helmet Head c.1968 were undoubtedly a response to Moore’s semi-abstract Helmet Head series, featured at the Wallace Collection in 2019.

What is required in order to restore the sculpture?

A conservator’s condition report should be completed for Striding Man which will comprehensively detail the requirements for the sculpture’s preservation. Thereafter the sculpture will probably need to be removed from site whilst a restoration specialist undertakes essential works before being waxed and polished. The sculpture will then be returned to a new location at the entrance to the Charter School for the enjoyment of students, staff, parents, and the local community.