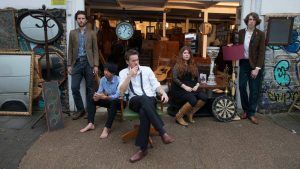 Are there any new things that you have discovered or learnt over Lockdown?

LUKE: I’ve learnt how resilient people can be when needed. It’s been very hard for many of us not seeing family or friends. Not being able to play music together or enjoy all the incredible things that London has to offer. If you’d asked if I could give up these things for a year I would have cried just at the prospect. However we’ve done it and can continue to do for as long as we need.

NICK: How to live with and love myself, my mic placement and my family. I never thought I would feel so happy living at home, doing nothing much but moving microphones around to get the right guitar sound.

ANGIE: Epping Forest. I’m lucky to live fairly close and since realising quite how near and vast and varied it is, I’ve all but become a forest ranger. Said exploration led to the choice of video location for our Dulwich Festival online performance.

What’s been the most positive aspect of the past year for you all?

LUKE: Just going back to a more simple way of living. For all its draw backs there’s been some real positives. Less planes in the sky. Less pollution. They’ve even had dolphins in Venice!

NICK: Having time to really reflect on what matters, and time to practice and refine the music that feels good. When everything is stripped away there’s only Netflix and what you really want to do creatively. It’s a mixed blessing.

What has the past year been like for you as a group?

LUKE: It’s been tricky. None of us live near each other so we haven’t been able to meet. We’ve also been stuck in a bit of a creative vacuum as well. I would have thought a year of doing nothing would have yielded some new songs, maybe a new album. But it’s been quite tough to get motivated and I think many of us have felt that.

NICK: Pretty good. I haven’t had to ask Angie to turn her accordion down even once.

ANGIE: I’ve missed my bandmates and the camaraderie a lot, along with the process of creating and performing together, there’s nothing quite like it and we’re lucky enough that we get to do that with our best friends but the plus side is Nick hasn’t shouted at me for a long time or been able to try and steal any of my vocal harmonies. We’ve only seen each other all together twice in over a year which is utterly weird considering how much time we’ve become used to spending together over the years. We’re looking forward to getting back ‘to it’.

What have Patch and the Giant been up to since your last appearance at the Festival four years ago?

LUKE: Well, before lockdown we had started recording a new album. It’s half way done. In fact probably more than half. But then the pandemic hit and we haven’t been able to finish it. Hopefully once we’re allowed in the same room again we can get it done.

ANGIE:  We were touring too but that’s such an alien concept right now I can’t actually remember what gigs feel like.

How would you describe your music?

LUKE:  Um, tricky. I think most bands struggle to identify themselves. I guess we fall under the indie folk bracket. Although whenever we play folk festivals we feel like the Rolling Stones.

ANGIE: We like to explore all sorts of direction in our writing and interpretation of what an instrument’s limits should be. That’s the most fun part, thwarting our own (and hopefully others’) expectations of what sounds a cello, violin, horn etc should be making.

Before your quintet was formed, some of you didn’t play the instruments that you do now, tell us a little about your journey together to create PATG

LUKE:  I guess we all serve the needs of the band or song. So if the song requires a mandolin then someone will learn the mandolin. I think we all like stretching ourselves musically so if there’s a chance of learning a new instrument then everyone is up for it. The issue is that you then have to carry about 20 instruments to each gig.

ANGIE: I’d never even touched an accordion before PATG, I started out playing keys but got really fed up  dragging a giant keyboard around on the Tube (in what looked like a body bag) so it was decided that I would play the accordion instead and….just like that, I played the accordion. Initially we were a glorious advert for Gumtree and the band comprised only members we’d found online but once we started meeting other musicians, we just started picking up new members from within the new circles we moved in. Our album title All That We Had, We Stole is a reference to many things but has quite a nice cheeky resonance here.

Can you tell us a little about your influences?

ANGIE: just too many. We once featured on the front cover of the Hackney Gazette culture section though with the title ‘From Bloc Party to Vaughan Williams’ though, which we thought was pretty cool and probably gives an idea of the breadth of our influences.

What one album would you want to be stranded on a desert island with?

LUKE: Abattoir Blues/Lyre of Orpheus by Nick Cave. Technically it’s two albums so you’ll get more bang for your buck.

ANGIE: Neil Young / After The Gold Rush, probably. Ask me next week though.

If money was no object, what would you do once Lockdown is fully lifted?

LUKE: Rent a villa in southern Italy, lock ourselves away for a month and not come back to England until we’ve written and recorded a new album.

ANGIE: I would be driving the van to that villa while Luke sleeps in the back.

What’s the best thing about being a musician?

I imagine you’ve really missed the live performances, what have you got lined up once restrictions are eased?

LUKE:  Can’t wait to play in front of a crowd. I think we’ll hug each and every one of them afterwards. Once restrictions allow us of course.

ANGIE: As well as finishing the record, we have a few outdoor shows lined up for the summer (hopefully) – watch this space.

Hear the new release from Patch and the Giant here